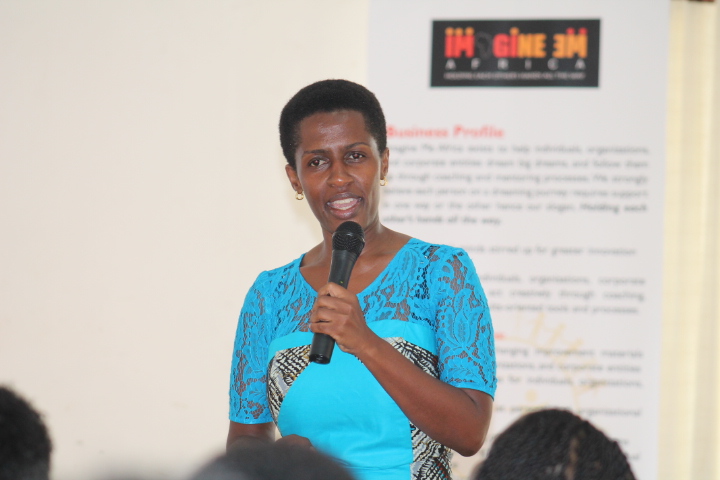 Joan Mugenzi is part of the INT alumni (third intake, 2010).  While on the programme, Joan sought ways to translate her gift of encouragement into a platform that could be used by many.  She was attached to the education sphere of influence, but kept on saying what her focus was on was not what the Education sphere was about.  None of the other spheres seemed to respond to her calling, although she enjoyed all the class discussions, and she picked a key message – to be a No-Excuse leader.

When the time for graduation came, Joan did not sign the pledge form because she was not ready to simply sign a document for which she had many unanswered questions about what next?

One thing was clear to her though, she is called to encourage people, and support them to nurture their dreams.

In 2014, through discussions on social media, Joan was able to revisit her passion.  She developed a methodology called Imagine Me, which is a step by step process that enables participants reflectively develop practical steps and actions towards the achievement of their dreams.  She has been running this programme since May 2014 under a company she founded, Imagine Me Africa ( www.imaginemeafrica.com).

Joan is a life strategist, offering both motivational training and coaching that enables individuals translate their ideas into reality.  She is a certified trainer of International Success Coach, Jack Canfield, and at the moment the only one in East Africa certified to teach Canfield’s Success Principles.

Most recently, Joan partnered with a team to start a wellness company, Juice Secrets, which is applying the Imagine Me methodology for its business development and growth.

She holds a Masters in Public Health Leadership from Uganda Christian University, Mukono, a Post Graduate Diploma in Journalism and Media Management from Uganda Management Institute and a Bachelor of Arts degree from Makerere University.

She is a Fellow of the Makerere University School of Public Health/Centres for Disease Control and Prevention, and an alumni of the US International Visitors Leadership Programme.